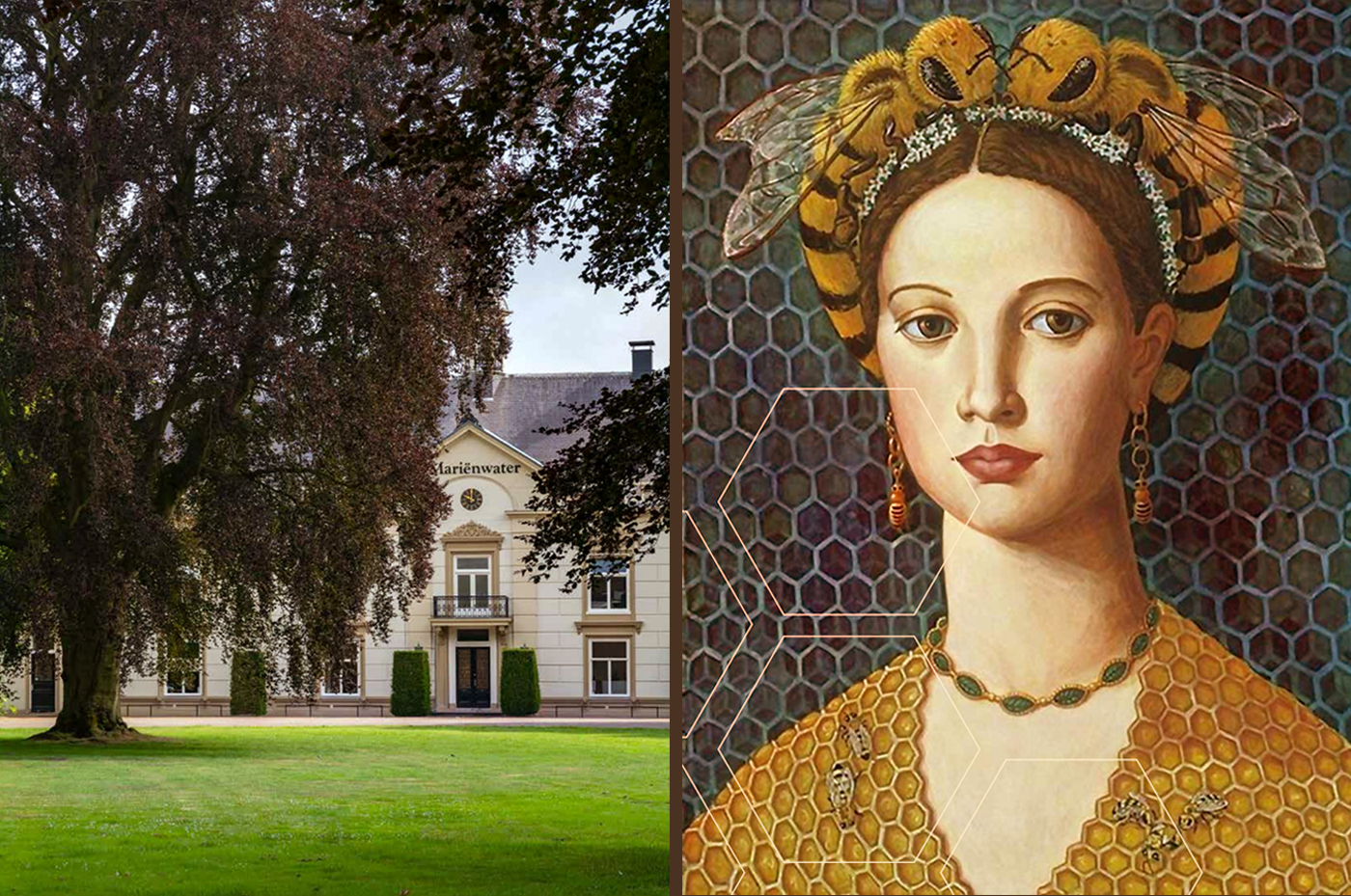 The history of Coudewater started with a small miracle in the late Middle Ages when, according to legend, a landowner discovered that the bees in his beehive had created a honeycomb in the shape of a double monastery. The story inspired Milla de Kampen, a wealthy and pious widow who felt this was a sign from God, to travel to Coudewater and establish a double monastery of the Bridgettine order in 1434. 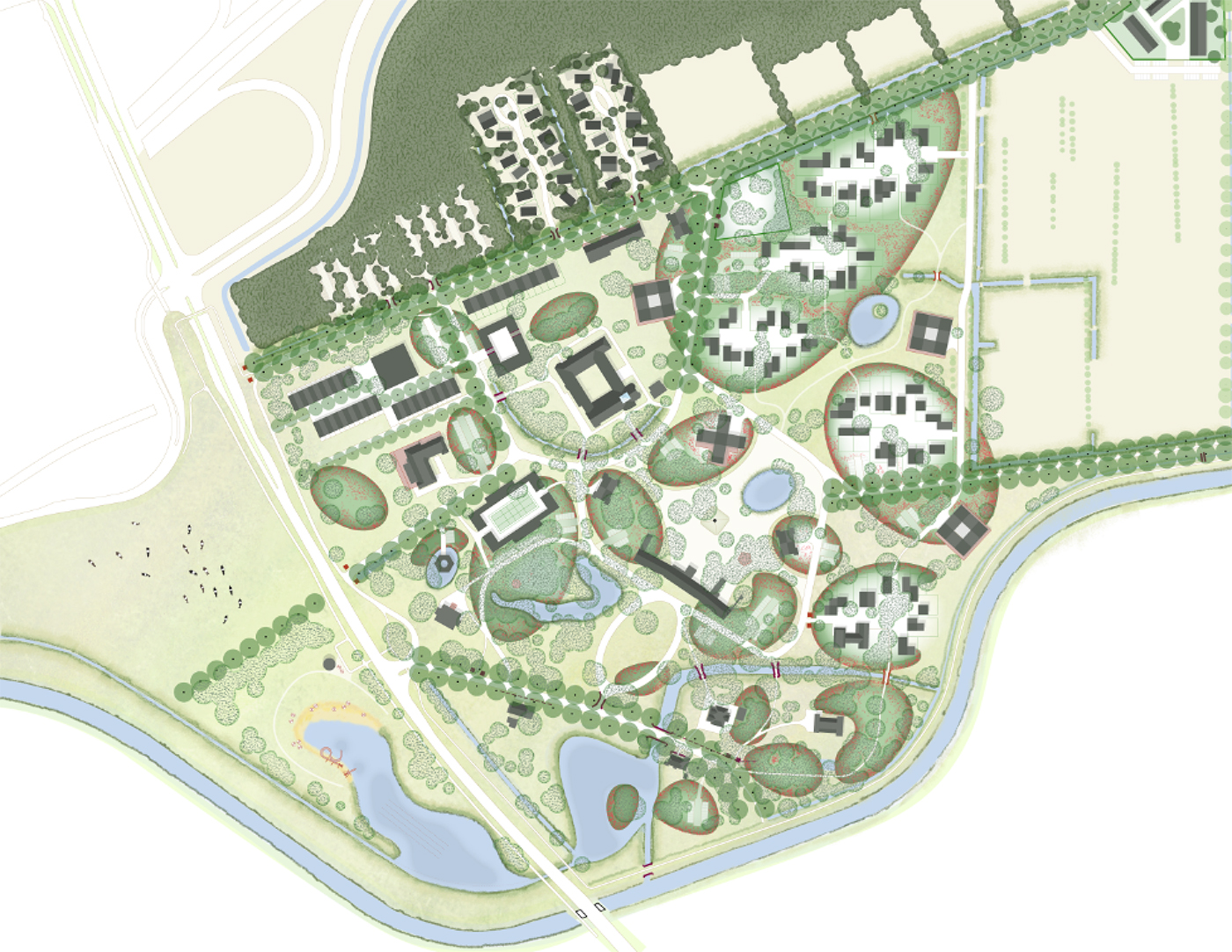 Over the centuries the resident nuns and monks were charged with the important task of nursing the sick. In 1870 Coudewater was converted into an institution for psychiatric care.

The estate’s history is still strongly felt on location, with buildings that reflect some of the mysticism of bygone days. Still present are an old cluster of structures comprising the original main building of the cloister and several doctor’s residences. The gardens, too, were designed in the somewhat secretive and mysterious English landscape style. 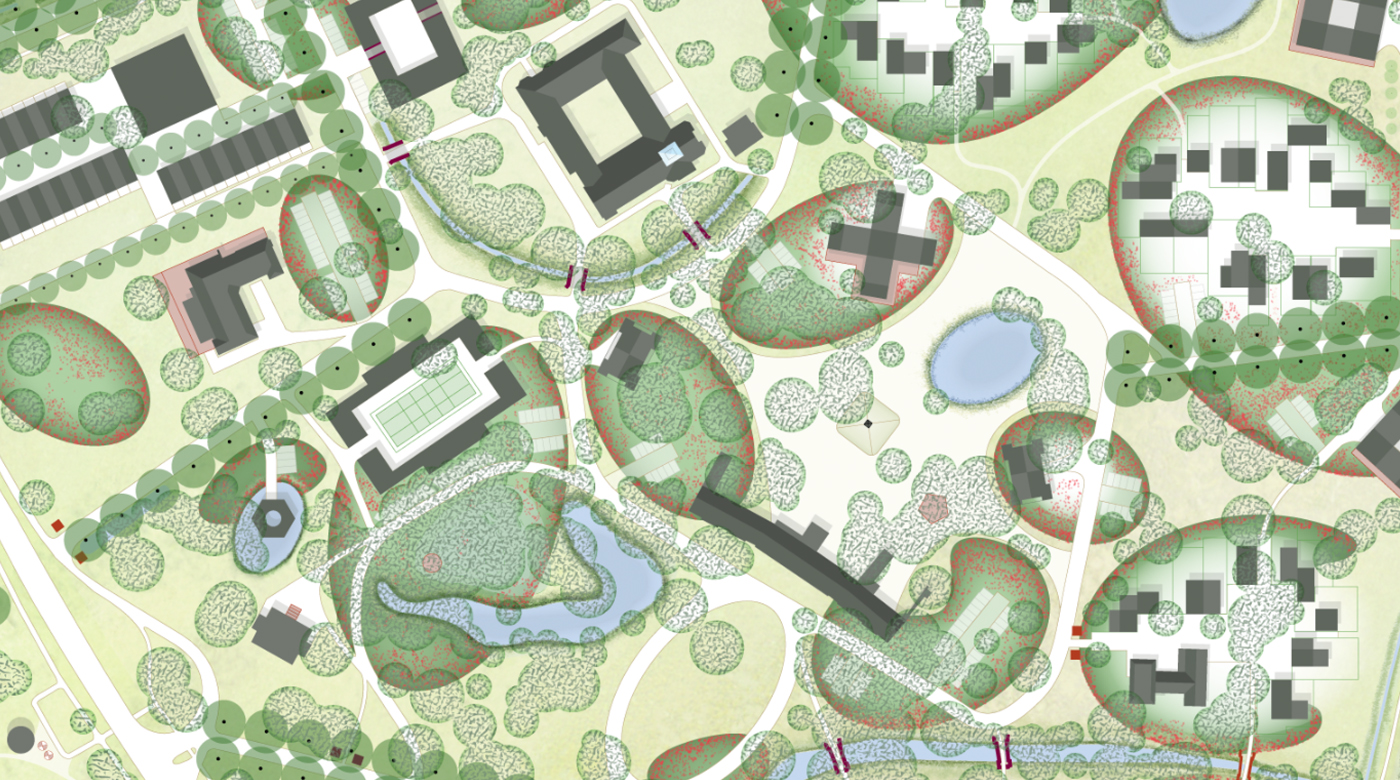 Reinforcing the existing landscape was central to our vision for Coudewater. This establishes a clear framework into which several residential typologies can be inserted, each based on a different landscape style. By adding a number of architectural elements sympathetic to the nature of a country estate – such as bridges, gateways, verandas, an aviary and a teahouse – Coudewater’s historical character is safeguarded, meaning it can continue to tell the story of its history.

The northern edge of the estate with its sandy grounds and open lots between the woods will be the setting for a handful of detached family dwellings.

None of the houses will have their own garden, but instead the site will be enhanced with random new trees that interact with the free-standing structures. 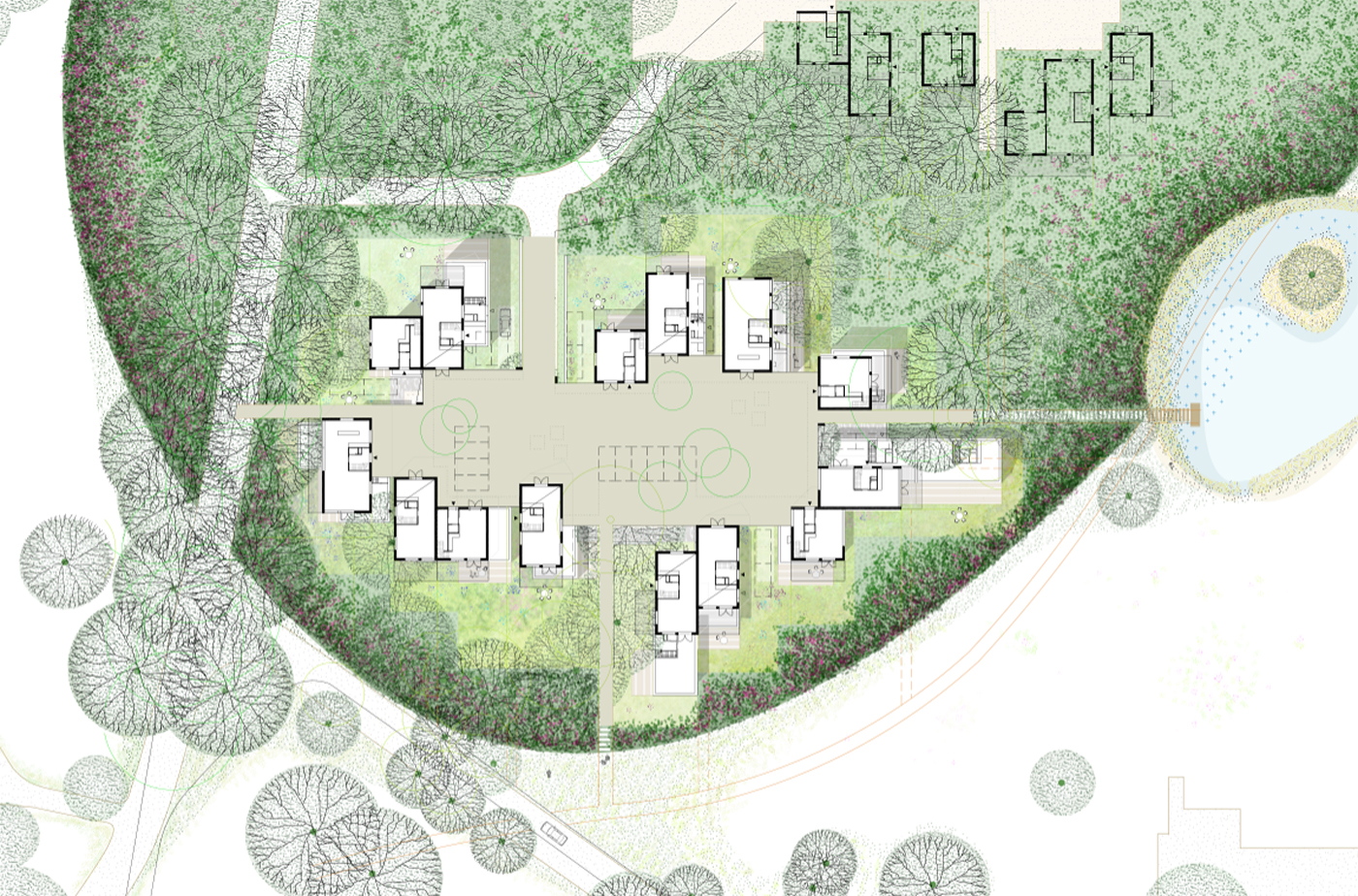 Architecturally, the houses will be designed in response to the environmental context. For example, by using large windows for daylight and ‘picture-framing’, and slanted roofs for the falling pine cones. 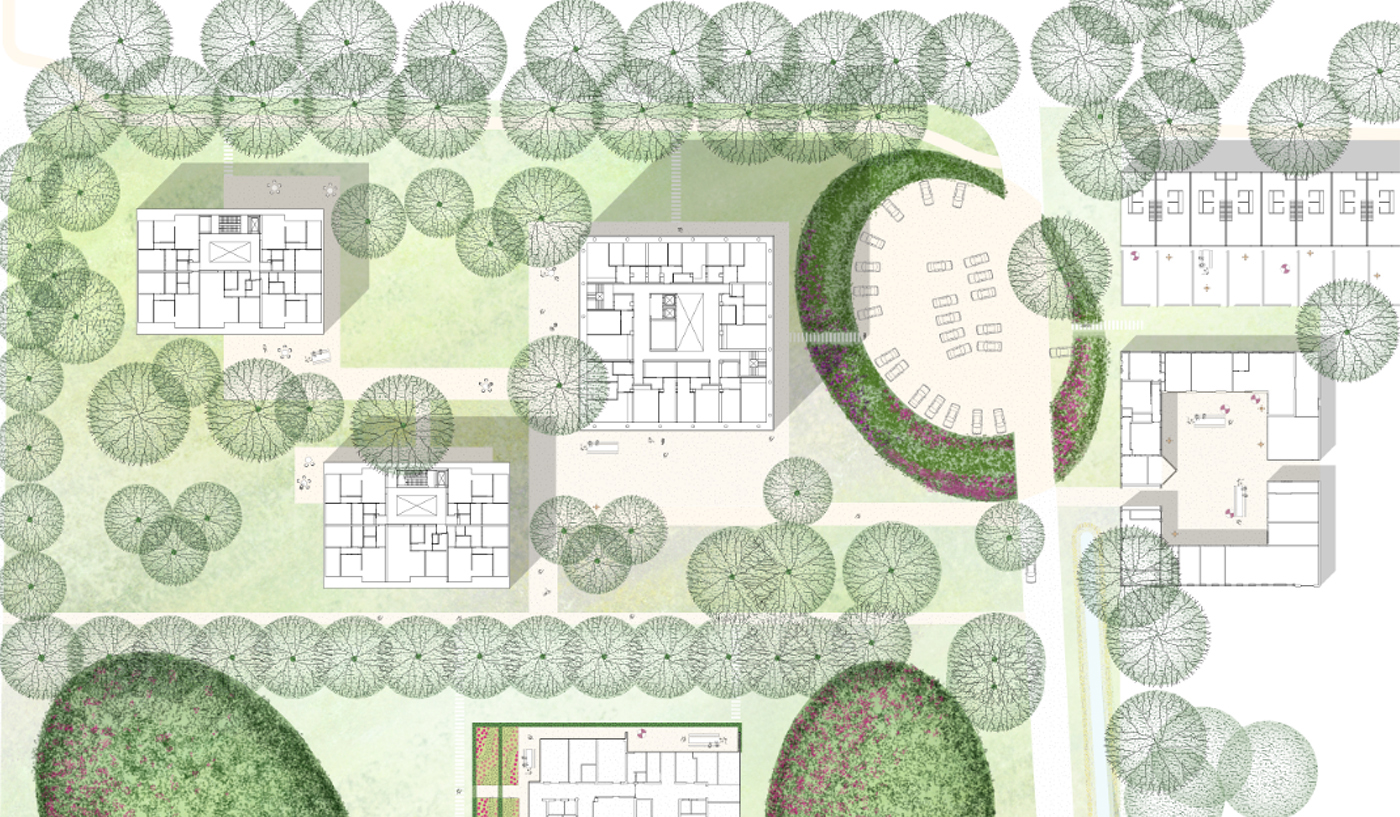 To the south of these sandy soils is where a stream once flowed before being used by the monastery to grow its own vegetables. The landscape here will consist of various ‘islands’, some of which evoke old farmsteads on a mound.

The estate’s existing landscape elements, such as long lanes and the clusters of rhododendrons, will be used as a foundation to strengthen the green infrastructure of the site. And, of course, traditional building typologies suitable to an old country estate will be employed. 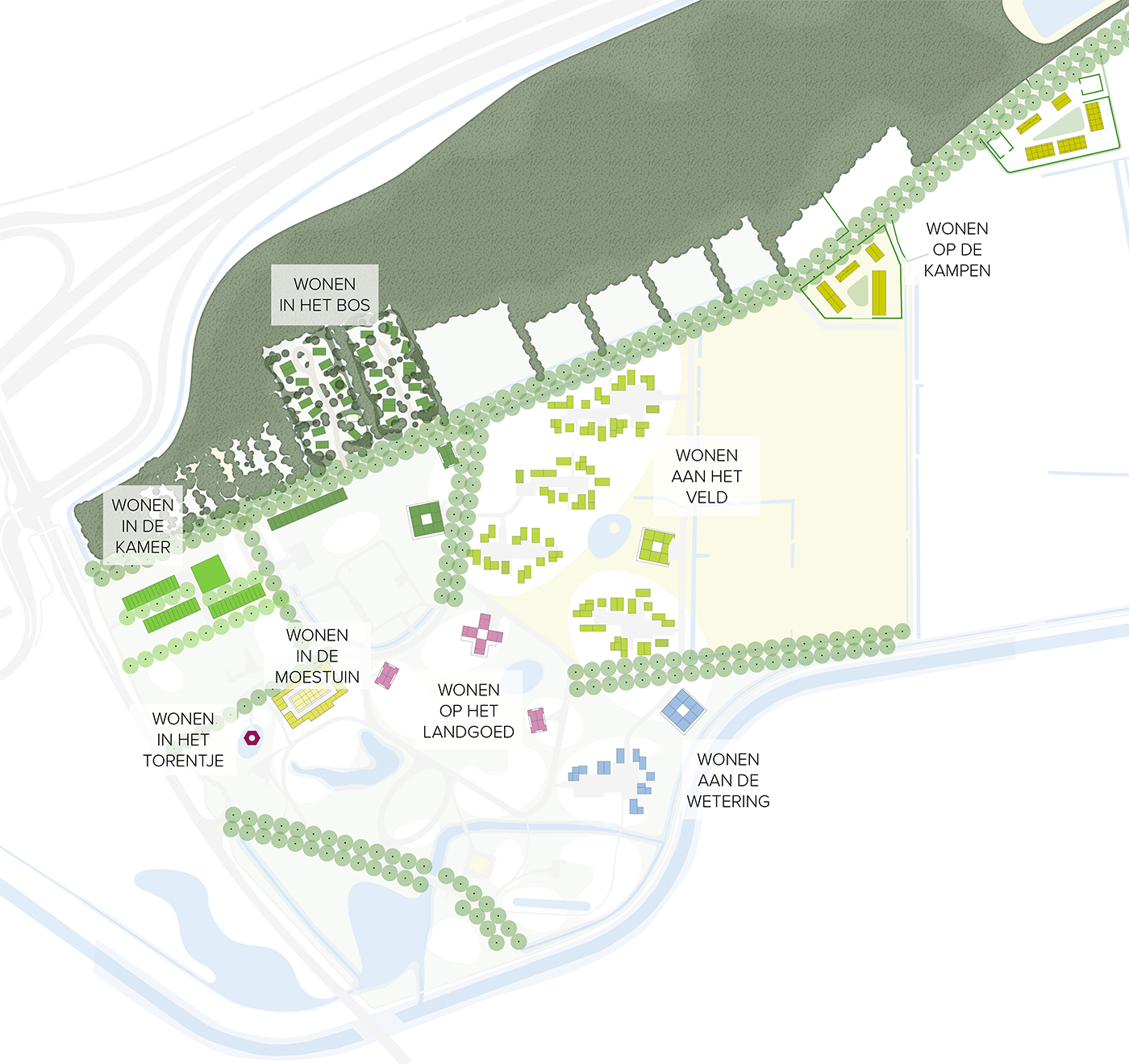 As a reference to the once self-sufficient Coudewater, we designed a communal vegetable garden sheltered in a courtyard, adjacent to one island of homes. Residential typologies that harmonise with the heritage-listed buildings on site are essential: verandas and grand staircases, for example, were also features of the doctor’s villas. 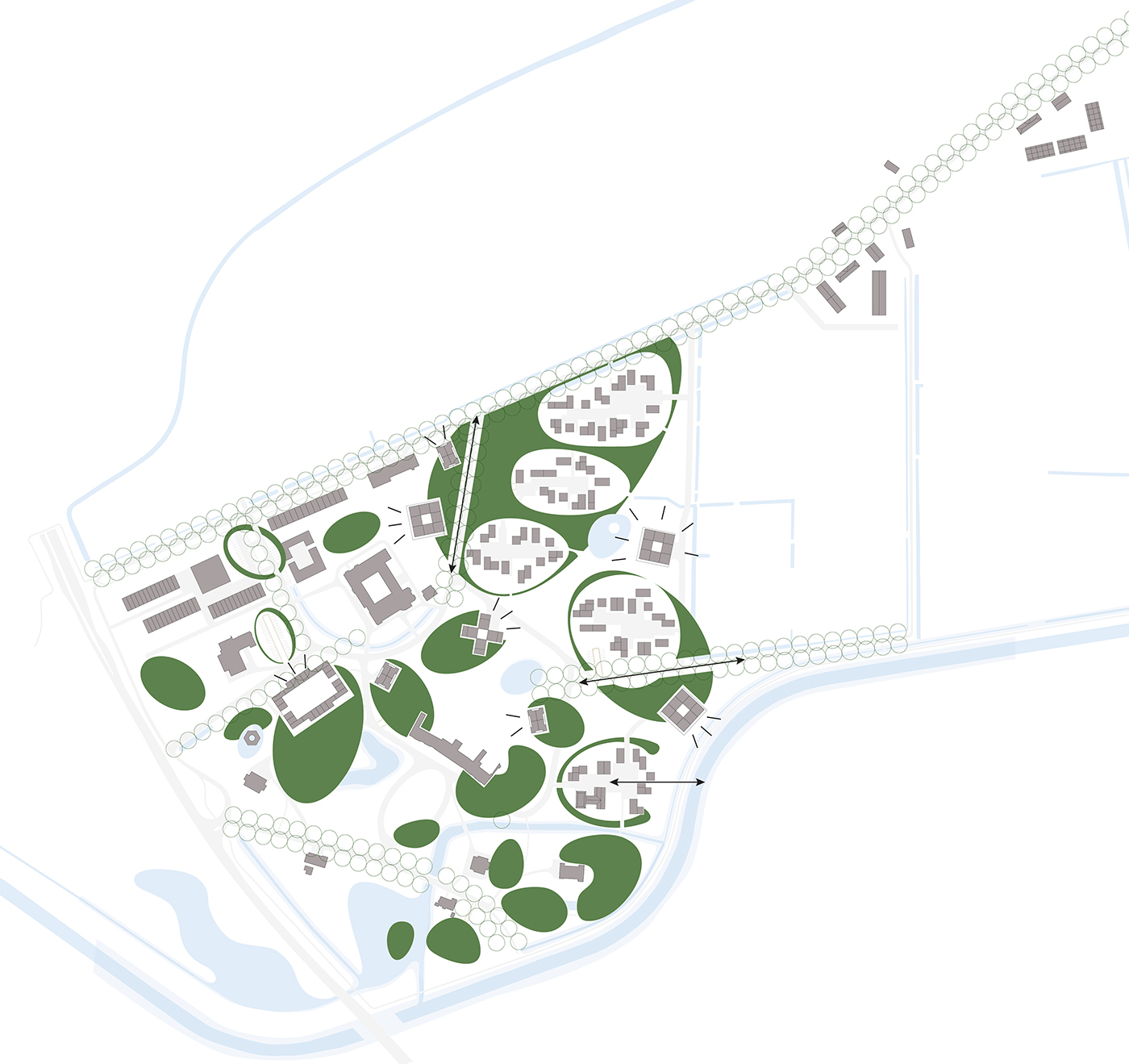 Residential living at Coudewater means living in and with nature. Sustainability is an important principle here, that can deliver both practical and aesthetic benefits. In order to keep cars out of view as much as possible, they will be parked in subterranean garages, under cover of woods or masked by rhododendron bushes. The differences in elevation per landscape type also has an incremental effect that allows rainwater to move gradually toward the wetter areas. In this way the entire estate functions as a buffer zone and reservoir, as well as a filter for the purification and re-use of rainwater. It is a drainage system that works naturally and efficiently while also creating an attractive landscape and an ideal habitat for small animals. 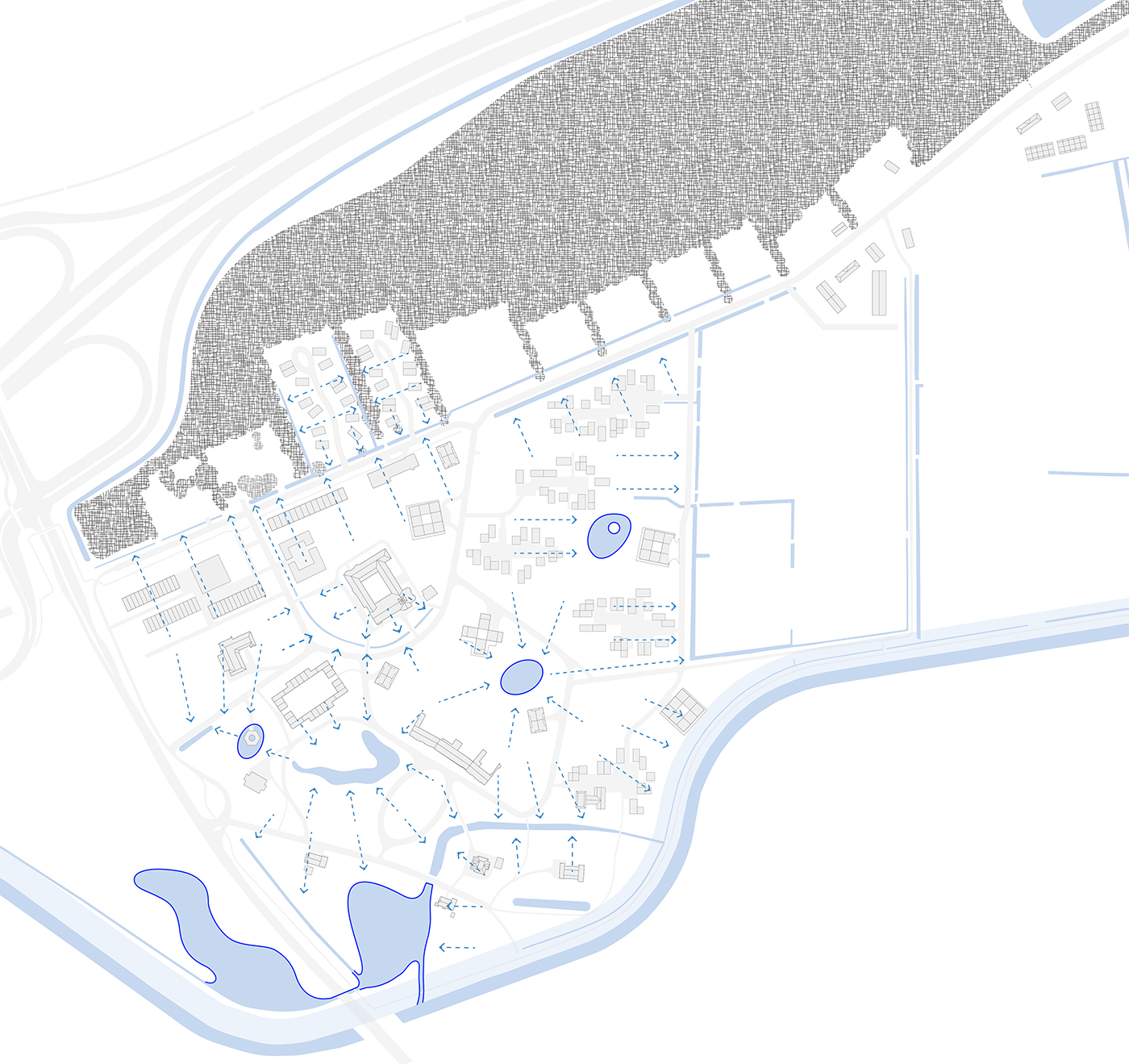 Finally, we felt that everyone should be able to enjoy the space and greenery of the renewed estate, in addition to the homeowners. This was the impetus behind the inclusion of a swimming pond, a beer brewery, apicultural facilities and a farm shop. These will expand the social and public reach of Coudewater in the future.

The Coudewater Estate near Rosmalen became vacant after GGZ East-Brabant left the property in 2018. BOOM Landscape, together with Tarra Architectuur & Stedenbouw designed a masterplan for the site for the developers BPD and Klok.